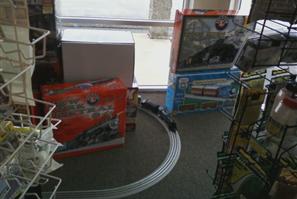 Robert (“Bob”) Harvey, owner of Cobblestone Crafts & Hobbies, has poured much of himself in the store he has owned the last 35 years.  He moved to Holland in 1969 and as a teenager began working for two local gentlemen who originally opened the store in 1974.  Robert served as manager to their three locations in the West Michigan area, but as the two current owners began closing their stores he made the choice to buy the Holland location.

In 1980, Cobblestone Hobbies was originally located downtown in the brownstone alley on 84 East 8th St., where the business still retains its cobblestone name.  As his vision grew, so did his need for space and the store moved in 1990 to a much larger downtown Holland location off of Central Avenue.  In April of 2010, the store moved to its current location to 367 East Lakewood Boulevard.

Nearly 50 customers assisted in the move to the new 7,500-square-foot location. The new building offers more room for shopping, as well as private parking.  Since Robert Harvey purchased the building, he was able to create a large gaming and flying room.